All About Water Features

The term “water feature” is given to a range of items including fountains, pools, ponds, waterfalls and streams, but people generally think of them as small, decorative outdoor items. The first water features were powered by gravity or hydraulic rams, but since the 18th century pumps have been used to circulate the water.

Today, water features mainly operate on electricity, but solar power is beginning to become popular as well. They are typically self-contained, so they don’t require water to be pumped in from an outside source. The water is recycled from a hidden reservoir, which is contained either inside the water feature itself or in a basin underground.

The sizes of water features range from ones small enough for a tabletop, to ones large enough to cover an entire wall. They can be constructed from stone, granite, stainless steel, glass or a range of other materials. Most modern water features have timers to control the hours they run and some have even more advanced controls, such as synchronizing music and light animation with the water’s movements.

Fountains are the most common water feature and come in a variety of styles. There are vase fountain kits in which the water spills from the vase onto the ground and into the basin below, where it’s recycled back up to the vase. Other styles include urns, bowls, rocks, monoliths and others.

Then there are spitting fountains, which feature a statue spitting into a bowl or other basin. These spitters are usually incorporated into larger water features, but can also be stand-alone fountains.

Waterfalls are another common feature, usually placed at the start of a pond or stream. It’s made up of a system of rocks and requires a strong pump to push the water over it and back down to the pond. Waterfalls can be big or small depending on preference and space available, but will generally be a more complicated set-up than a fountain.

Water Walls are a relatively new water feature, but are gaining popularity, especially in high-end homes and buildings. It consists of a large rock slab over which water falls. The water can come down in a series of steps or flow like a curtain down to the bottom, where the reservoir is contained. The wall can be a single sheet of glass or rock, such as granite or slate, or it can be built of wood or resin and covered in tiles or concrete. A water wall will be louder than a fountain or waterfall, so it’s best to place it in a large space where it won’t drown out conversation.

To see our complete collection of beautiful and unique water features, visit our Design Center: 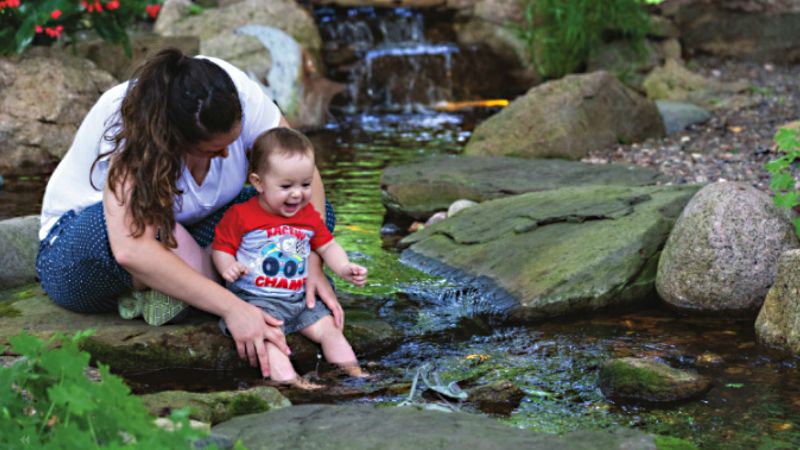 Get Our Monthly Newsletter!

You have Successfully Subscribed!